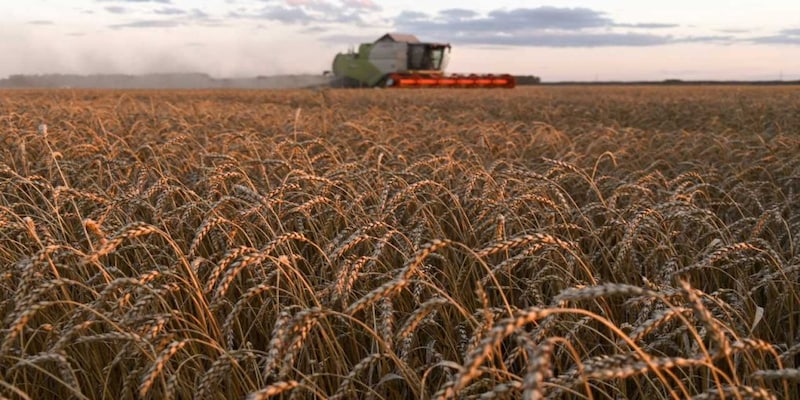 India's wheat production forecast has been revised down to 1,050 metric tonnes from 1,113 MT. "Last year's production figures were 1,095 MT. The ongoing heatwave has affected yield to some extent — expect 1,050 MT this year and small drop in yield in Punjab and Haryana," Agriculture Secretary Manoj Ahuja said.

A day after the government banned wheat exports with immediate effect as part of measures to control rising domestic prices, the Union food, commerce, and agriculture secretaries addressed a press conference to explain the sudden decision.

Food Secretary Sudhanshu Pandey said the decision should not be misinterpreted, and said it was taken in view of the rising prices of the foodgrain across the country. He said the decision was not taken on the spur of the moment, and that a lot of thought had gone into it. "The Public Distribution System (PDS), which is the backbone of the country's food security system, will run smoothly. Availability of wheat is not an issue, but prices are rising," Pandey said at the press conference on Saturday.
Export shipments for which irrevocable letters of credit (LoC) have been issued on or before the date of this notification will be allowed, the Directorate General of Foreign Trade (DGFT) said in a notification dated May 13.
Source: Department of Consumer Affairs
India's wheat production forecast has been revised down to 1,050 metric tonnes from 1,113 MT. "Last year's production figures were 1,095 MT. The ongoing heatwave has affected yield to some extent — expect 1,050 MT this year and small drop in yield in Punjab and Haryana," Agriculture Secretary Manoj Ahuja said.
The government had earlier clarified that wheat exports will be allowed on the basis of permission granted by the Government of India to other countries to meet their food security needs and based on the request of their governments. Commerce secretary BVR Subrahmanyam reiterated this and said, "We are not reneging on any existing wheat contract. There will be no open masket sale scheme (OMSS); only for existing contracts."
Subrahmanyam said the decision to ban open export of wheat was also taken to curb hoarding due to the rise in prices. "There is no dramatic fall in wheat production; there are ample food stocks with the government and in the private sector, but wheat prices have gone up by almost 40 percent in some parts of the country. Food is a sensitive item for all. The government is committed to ensuring food security of neighbours and vulnerable countries," he said.
Also read: India halts wheat exports with immediate effect to control domestic prices
He said internationally too, wheat prices have gone up. "Wheat is being sold at $450-480 per tonne. We procured 433 lakh MT last year and 180 LMT so far this year, but stock will be lower than last year."
Food Secretary Pandey said the government has changed the proportion of wheat and rice being provided under the Pradhan Mantri Garib Kalyan Anna Yojana (PMGKAY). "States getting 100 percent wheat will continue getting it, but other states getting a mixed supply will get a higher proportion of rice," he said.
Fifty-five LMT of wheat has been replaced by rice in PMGKAY, while 61 MLT of wheat has been replaced by rice for distribution under the National Food Security Act.
Source: Department of Consumer Affairs
Pandey said India currently has 331 MT of rice and 320 MT of wheat in stock, adding that 222 MT of wheat is in the process of being procured right now.
"Estimated production changed in a month's time — many other nations saw crop failure," Subrahmanyam said.
According to government information, wheat production has been affected in the following countries:
European Union: Crops in half the wheat belt lack rain at the onset of a key development period, and temperatures in top grower France have soared to summer-like levels unseasonably early — production may come down.
United States: Dryness is plaguing the US Central Plains. Harvests in top producer Kansas start next month, and output will fall. Crop insurance agents expect some fields to yield zero to five bushels an acre, versus the normal 35 to 40 bushels.
Canada: Low temperatures are delayed seeding in Canada, and producers are now trying to plant in fields that are either too wet or too dry. Drought is a concern in southern Alberta, a growing area for spring wheat and durum used in pasta.
Also read: India banned wheat exports to stop ‘manipulators from China’, say govt sources
Food Secretary Pandey said seven other nations — Russia, Argentina, Kazakhstan, Hungary, Bulgaria included — have already banned wheat export. The Philippines has started campaign to consume fewer wheat products
"Sentiments were driving up prices, but the market knows supply and demand regulations. Price softening will happen," Pandey added.
"The Commerce Ministry will organise a series of meetings on exports in major wheat-growing states. The decision (to ban export) is dynamic and based on periodic estimates. We need to maintain credibility of traders — they have to export wheat in future too," Commerce Secretary Subrahmanyam said.
Also read: G7 warn of Ukraine grain crisis, ask China not to aid Russia
Check out our in-depth Market Coverage, Business News & get real-time Stock Market Updates on CNBC-TV18. Also, Watch our channels CNBC-TV18, CNBC Awaaz and CNBC Bajar Live on-the-go!