Updated : February 15, 2020 09:31 AM IST
Till February 9, only 61 percent of eligible beneficiaries have been enrolled.
The flagship farmers scheme, PM KISAN, saw a big push in enrollments in the first 5 months but slowed down after that.

The government's flagship PM KISAN scheme has seen slow progress in the verification of the eligible beneficiaries. The data accessed by CNBC-TV18 through an RTI query revealed that the flagship farmers scheme PM KISAN saw a big push in enrollments in the first 5 months – incidentally, that was also right before the central elections – after which the pace of enrollment slowed. Till February 9 only 61 percent of eligible beneficiaries have been enrolled.

One big reason for slowing progress has been the rejection of data submitted and wrong or invalid Aadhaar submissions.

RTI data reveals that the rejection progress on disbursing installments has also slowed down since the first installment was given. This process has been particularly slow in the current December 2019 – March 2020 period since Aadhaar seeding was made mandatory to claim the December 2019 installment. Monthly data accessed through RTI suggests that even the number of farmers who joined the scheme during the first phase, i.e. December 2018  - March 2019, have seen a 6.5 percent drop in receiving their third installments.

So, even from the first set of enrolled farmers – over 30 lakh farmers have still not got their third installment, which was supposed to be doled out before November 30, 2019. For the farmers who joined the scheme between April and June 2019, 25 percent have still not received their third installment, which started in December 2019. Similarly, there is a 24 percent drop in the second installment for farmers who logged in July-November 2019 period. Chhattisgarh, Maharashtra, Madhya Pradesh, Odisha are some of the states that have seen the highest number of rejections of farmers' applications. Nearly one-third of data submitted in Chhattisgarh and one-fourth in Maharashtra and Madhya Pradesh have been rejected in the last one year. Multiple reasons for rejection been but incorrect Aadhaar seeding, incorrect bank account details, duplications, among others. 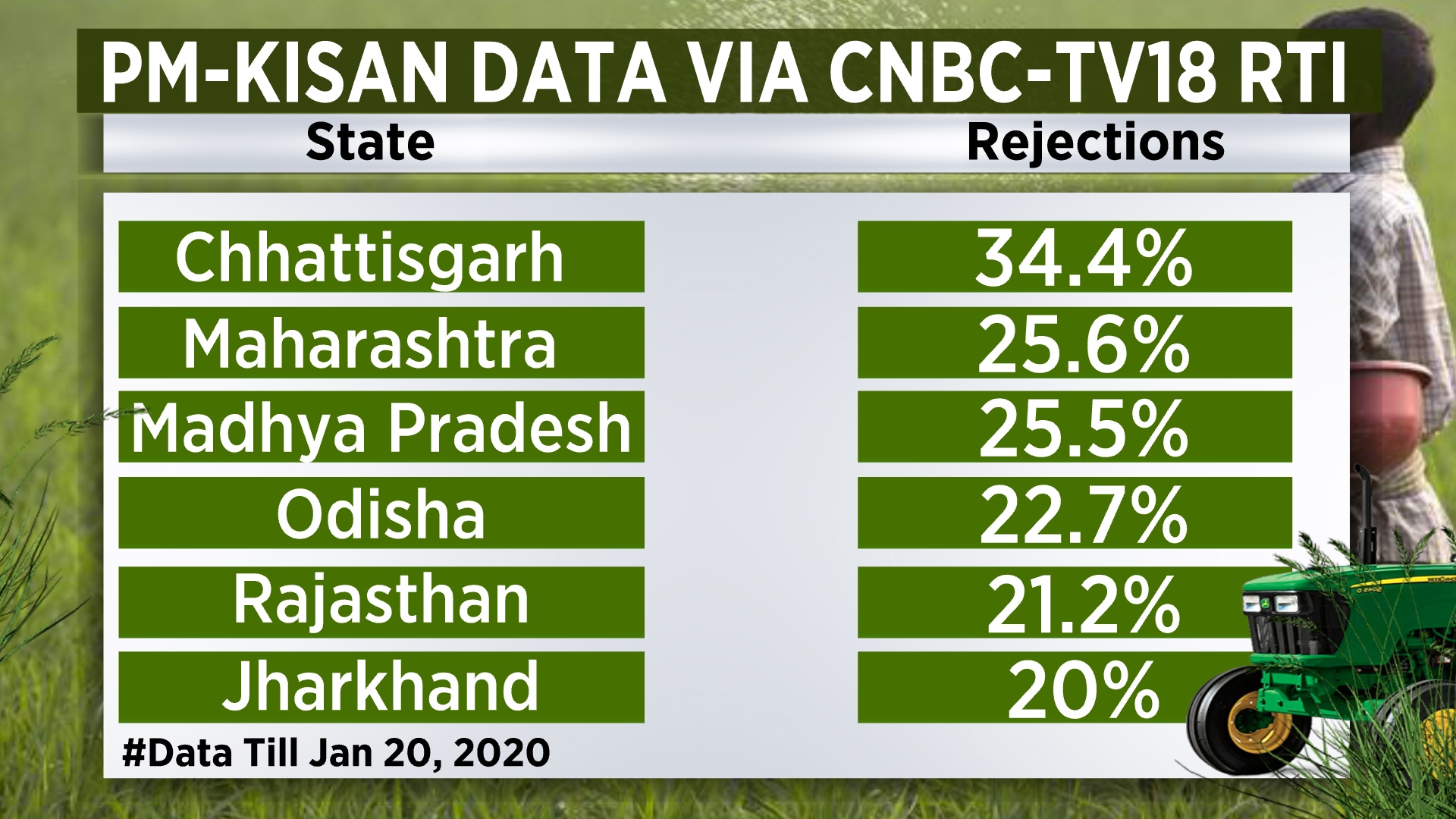 Maharashtra saw the highest percentage of farmers' data rejections owing to the duplication of records. Almost a third of farmers' data was rejected on account of duplicate applications that were traced to be of the same farmer family. Almost 20 percent of data rejected in Jharkhand on that count. Madhya Pradesh had the highest number of rejection based on failed transactions, owing to wrong bank account details being submitted or the name of the beneficiary not matching in bank documents. Almost 11 percent of applications were rejected in Odisha at the last stage by the state if the application failed to meet requirements.

But the biggest reason has been Aadhaar seeding and verification. Since Aadhaar has been made mandatory to claim the PM KISAN installment, even those who are verified and registered have to confirm and verify their Aadhaar data to claim their subsequent installments.

Uttar Pradesh has the highest number of rejections based on invalid Aadhaar. Of the total 13 percent total rejections, 12 percent were owing to the entry of invalid Aadhaar details. With 2.2 crore eligible farmers UP has the higher number of beneficiaries, and almost 31 lakh farmers have been rejected in the last one year only owing to invalid or incorrect Aadhaar details being submitted. 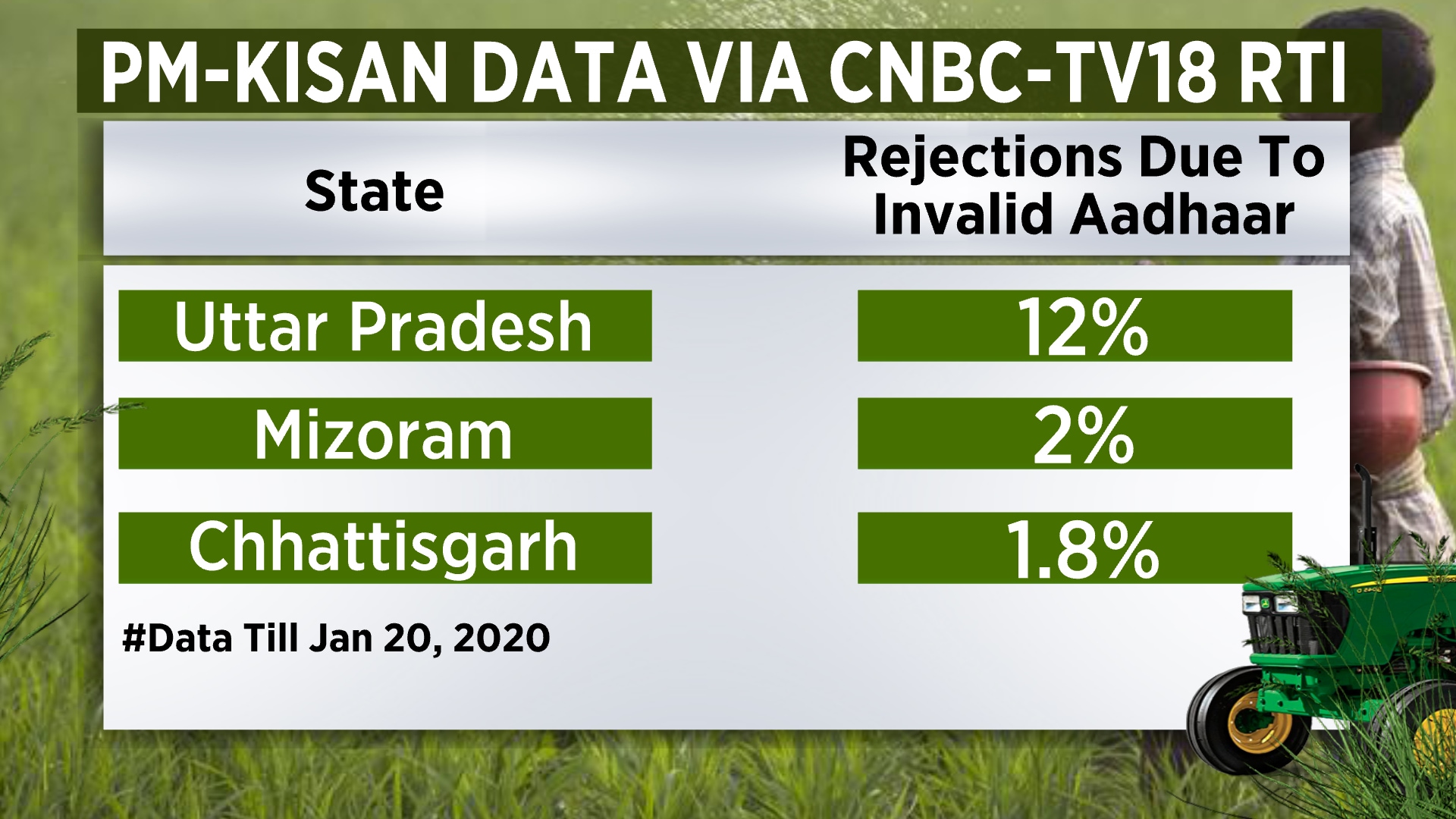 Government officials ensure the farmers will not lose their money. “In case of a technical issue like the verification of data there is a delay, but the entitlement doesn't go. So even if we have to make the payment in the next financial year the farmer will still get his money from the date it is due. So there is no loss to any farmer. Of course, there are issues of data verification in time which we are taking up on a rigorous scale,” Vivek Agarwal, Joint Secretary and CEO of PM KISAN told CNBC TV18.

As of now, 8.8 crore total beneficiaries have been already enrolled nationwide. Of this 8.4 crore farmers have been receiving installment payments and of this almost 1.2 crore farmer data is still pending Aadhaar verification. This means if Aadhaar is not corrected, even these verified farmers could lose their installment for the December 2019 – March 2020 period.

The majority of this burden is on Uttar Pradesh with more than half of the pending Aadhaar verification applications from UP. Other states like Madhya Pradesh, Rajasthan, Maharashtra also have a large number of farmers awaiting Aadhaar authentication and the state needs to step up. Uttar Pradesh has started a statewide drive to get correct Aadhaar details from farmers.

The government, however, is hopeful of meeting the Aadhaar verification target. “We are hoping by March 31 the entire data will be Aadhaar authenticated and we will finally go for Aadhaar based payment so that there is a complete KYC for our PM-KISAN beneficiaries. If someone misses out on payment by March 31, we will move pending liabilities to next fiscal,” Agarwal said.