As farmers protest, here's a look at what MSP is and why it is important

Updated : September 22, 2020 09:25 PM IST
MSP is a shield that protects the farmer from sudden dip in prices.
On Monday the cabinet committee on economic affairs (CCEA) gave nod to hiking the MSP for key rabi crops for 2020-21.

Farmers in Punjab and Haryana have been agitating over the recently-passed farm Bills in Parliament. They are concerned that the new agri Bills could put an end to the MSP regime.

Recently, PM Narendra Modi tweeted, "Higher MSP will empower farmers and contribute to doubling of their income. Increased MSP, along with the series of agriculture reforms passed by Parliament will ensure dignity and prosperity of farmers. Jai Kisan!" 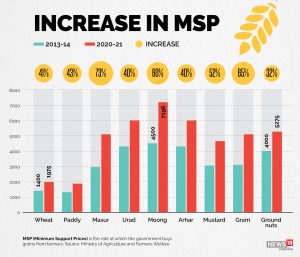 Here's a look at what MSP is and why it is important:

Minimum Support Price (MSP) is a remunerative price to help farmers with adequate returns for their produce. In simple words, MSP is a shield that protects farmers from sudden dip in prices. Thus, it is conducive in maintaining food security and provides a base for price discovery in the market. This gives financial stability to the agriculture system and encourages better production.

To protect farmers' interest, the Cabinet Committee on Economic Affairs (CCEA) on Monday approved a hike in MSP for six key crops for the 2020-21 season, including wheat.

Which crops are covered under MSP?

The Commission for Agricultural Costs & Prices (CACP) recommends MSP for 22 crops before the sowing period each year. There are 14 Kharif crops and seven Rabi crops covered under MSP. Copra, de-husked coconut, jute, sugar cane (FRP) are the four calendar year crops. Fair and remunerative prices for sugar have also been declared.

Agriculture Minister Narendra Singh Tomar said on September 21 that the hike in before ahead of the Rabi season (October-March) will help farmers take decisions on their crop structure.

According to the recommendations of Swaminathan Commission, the MSP should be at least 50 percent more than the average production cost. The new hike is in accordance with the recommendation as the Centre aims to double the income of farmers by 2022.

The CACP considers the following factors as important basis to fix MSP:

This year, the central government has spent Rs 1.13 trillion on MSP to farmers for Rabi crops such as wheat, pulses and oilseeds. This is 30 percent higher than the previous crop year.

What power does the state government hold in MSP?

There is no draft of regional MSP. The entire country has one uniform MSP. But, the state government can give a bonus on any crop by looking at the cost that is incurred.

As per the Kharif 2019-20 report, during 2017-18 and 2018-19, states like Kerala, Tamil Nadu and Chhattisgarh declared bonuses for paddy. Additionally, Chhattisgarh declared a bonus of Rs 750 per quintal for paddy in 2018-19, which is about 43 percent of the MSP.  Although the procurement of paddy in Chhattisgarh has become controversial as the central government  refused to allow the state to pay farmers a bonus over and above  the fixed MSP.
Tags angry farmers Kharif crops under MSP Minimum Support Price MSP rabi crops